Boy did it ‘bucket-down’ early this morning! Not just raining “cats ‘n dogs”, it was more like ‘bears & elephants’ - ha ha! By the way, there’s no such phrase ‘bears & elephants’, so don’t get confused with that now ~ it’s just silly-old-me playing around with words.

We do however use “it’s raining cats ‘n dogs” when it rains heavily. Some people like to use the phrase, “the heavens opened” - meaning it is pouring down!

Whatever the phrase may be, make sure you have a ‘brolly’ (umbrella) with you today ... 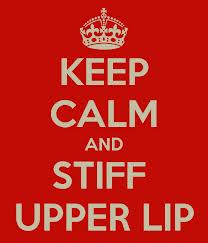 Here is the last of my looong list of British Idioms ~ read them and have fun using them, like true Brits ...

Over-egg the pudding
If you over-egg the pudding, you spoil something by trying to improve it excessively. It is also used nowadays with the meaning of making something look bigger or more important than it really is. ('Over-egg' alone is often used in this sense.)

Pin money
If you work for pin money, you work not because you need to but because it gives you money for extra little luxuries and treats.

Pink pound
In the UK, the pink pound is an idiom for the economic power of gay people.

Queer fish
A strange person is a queer fish.

Quids in
If somebody is quids in, they stand to make a lot of money from something. (Quid is slang for pound.)

Rake over old coals
If you go back to old problems and try to bring them back, making trouble for someone, you are raking over old coals.

Right royal
A right royal night out would be an extremely exciting, memorable and fun one.

See you anon
If somebody says this when leaving, they expect to see you again soon.

Shy bairns get nowt
An idiom primarily used by those from the North East of England, used to emphasise the fact that children who fail to ask for something (usually from an older person) probably won't succeed in obtaining it. (bairn = child, nowt = nothing)

Spend a penny
This is a euphemistic idiom meaning to go to the toilet.

Sticky end
If someone comes to a sticky end, they die in an unpleasant way. ('Meet a sticky end' is also used.)

Sticky wicket
If you are on a sticky wicket, you are in a difficult situation.

Stiff upper lip
If you keep your emotions to yourself and don't let others know how you feel when something bad happens, you keep a stiff upper lip.

Tally ho!
This is an exclamation used for encouragement before doing something difficult or dangerous.

Tears before bedtime
This idiom is used when something seems certain to go wrong or cause trouble.

Ten a penny
If something is ten a penny, it is very common. ("Two a penny" is also used.)

Thin blue line
The thin blue line is a term for the police, suggesting that they stand between an ordered society and potential chaos. (Police uniforms are blue.)

Up sticks
If you up sticks, you leave somewhere, usually permanently and without warning- he upped sticks and went to work abroad.

Up the spout
If something has gone up the spout, it has gone wrong or been ruined.

Up the stick
If a woman is up the stick, she's pregnant.

Wallflower
A woman politician given an unimportant government position so that the government can pretend it takes women seriously is a wallflower. 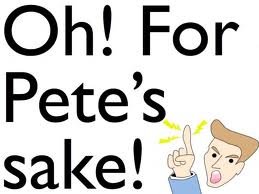 Actually not for 'Pete' but for YOUR sake ~> learn and use these:

Off your chump
If someone is off their chump, they are crazy or irrational.

Off your rocker
Someone who is off their rocker is crazy.

On the blink
Is a machine is on the blink, it isn't working properly or is out of order.

On the cards
If something is in the cards, it is almost certain to happen.

On the dole
Someone receiving financial assistance when unemployed is on the dole.

On the fiddle
Someone who is stealing money from work is on the fiddle, especially if they are doing it by fraud.

On the game
A person who is on the game works as a prostitute.

On the knock
If you buy something on the knock, you pay for it in instalments.

On the knocker
If someone is on the knocker, they are going from house to house trying to buy or sell things or get support.

On the nod
Someone who's on the nod is either asleep or falling asleep, especially when the shouldn't or are are in a position unusual for sleep, like sitting or standing.

On the take
Someone who is stealing from work is on the take.

On the trot
This idiom means 'consecutively'; I'd saw them three days on the trot, which means that I saw them on three consecutive days.

Be 'as keen as mustard', have some fun and use these in your conversations?

Jam tomorrow
This idiom is used when people promise good things for the future that will never come.

Keep your chin up
This expression is used to tell someone to have confidence.

Keep your wig on!
This idiom is used to tell someone to calm down.

Kick your heels
If you have to kick your heels, you are forced to wait for the result or outcome of something.

Lose your bottle
If someone loses their bottle, they lose the courage to do something.

New man
A New man is a man who believes in complete equality of the sexes and shares domestic work equally.

Nosy parker
A nosy parker is someone who is excessively interested in other people's lives. ('Nosey parker' is an alternative spelling.)

Not cricket
If something is not cricket, it is unfair.

Off on one
If someone goes off on one, they get extremely angry indeed. 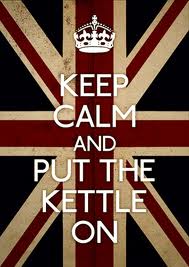 These are all interesting ones that you can use while having a good ol' natter over a cuppa tea ...

Go spare
If you go spare, you lose your temper completely.

Greasy pole
The greasy pole is the difficult route to the top of politics, business, etc.

Grey pound
In the UK, the grey pound is an idiom for the economic power of elderly people.

Have a riot
If you have a riot, you enjoy yourself and have a good time.

Hold the baby
If someone is responsible for something, they are holding the baby.

Home, James
This is a cliched way of telling the driver of a vehicle to start driving. It is supposed to be an order to a chauffeur (a privately employed driver).  The full phrase is 'Home, James, and don't spare the horses'.

I should cocoa
This idiom comes from 'I should think so', but is normally used sarcastically to mean the opposite.

If you'll pardon my French
This idiom is used as a way of apologising for swearing.

In a tick
If someone will do something in a tick, they'll do it very soon or very quickly.

In spades
If you have something in spades, you have a lot of it.

In the clink
If someone is in the clink, they are in prison.

In the club
If a woman's in the club, she's pregnant. 'In the pudding club' is an alternative form.

It's as broad as it is long
Used to express that it is impossible to decide between two options because they're equal.